Ozone depletion over the Arctic hit a “record level” in March, the biggest since 2011, but the hole has now closed, the UN World Meteorological Organization (WMO) said on Friday, 01 May 2020.

The springtime phenomenon in the northern hemisphere was driven by ozone-depleting substances still in the atmosphere and a very cold winter in the stratosphere, WMO spokeswoman Clare Nullis told a UN briefing in Geneva.

“These two factors combined to give a very high level of depletion which was worse than we saw in 2011. It’s now back to normal again … the ozone hole has closed,” she said.

Nullis, asked whether less pollution during the pandemic had played a role, said: “It was completely unrelated to COVID.”

The last time similarly strong ozone depletion was observed over the Arctic was during spring 2011, and ozone depletion in 2020 was even stronger, according to WMO’s Global Atmosphere Watch ozone observing stations, NASA and the Copernicus Atmospheric Monitoring Service implemented by ECMWF. 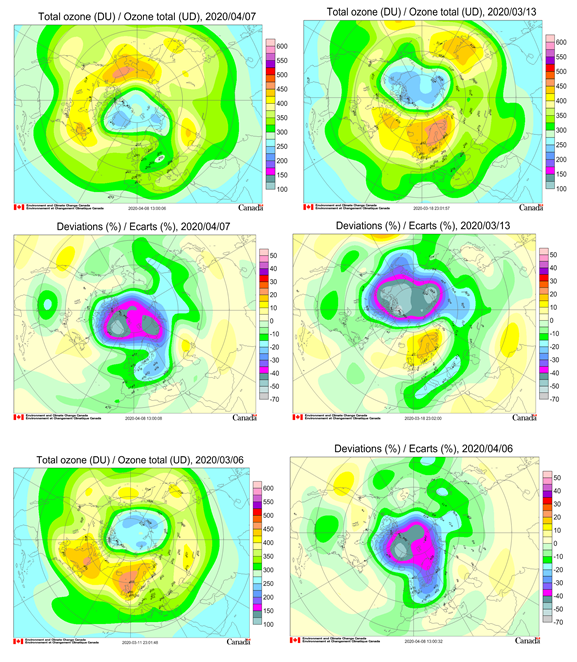 The ozone hole closed in April 2020 with an increase in stratospheric temperatures which culminated in an influx of ozone-rich air from the lower atmosphere.

The depletion would have been even worse if it had not been for a successful international agreement called the Montreal Protocol on Substances that Deplete the Ozone Layer. This led to a phaseout of substances such as chlorofluorocarbons (CFCs). But they remain in the atmosphere for several decades and their concentrations are still high enough to cause severe ozone destruction.

“The Arctic stratosphere continues to be vulnerable to ozone-depleting substances linked to human activities,” said WMO Secretary-General Petteri Taalas.  “The degree of ozone loss experienced in any particular winter depends on the meteorological conditions. The 2020 ozone loss shows that we have to remain vigilant and maintain continuous observations,” said WMO Secretary-General Petteri Taalas.

“WMO’s Global Atmosphere Watch stations in the Arctic and the Antarctic provide us with early warnings in case of low ozone and intense UV radiation levels. We pay tribute to National Meteorological Services for continuing vital atmospheric monitoring and observing activities despite the constraints of the COVID-19 era,” he said.

The formation of an ozone hole is driven by extremely cold temperatures (below -80°C), sunlight, wind fields, and damaging chemicals. The majority of the ozone depletion in the Arctic takes place inside the so-called polar vortex: a region of fast-blowing circular winds that intensify in the fall and isolate the air mass within the vortex, keeping it very cold.

This winter (2019-2020) the severity of the Arctic ozone depletion was supported by unusually weak upper-atmospheric “wave” events. These waves drive masses of air through the upper atmosphere traveling upward from the lower atmosphere in middle latitudes which disturb the vortex around the Arctic and bring ozone rich air from other parts of the stratosphere.

In addition to that the stratospheric polar vortex over the Arctic was strong and combined with consistently very low temperatures for a long period of time promoting the creation of a large area of polar stratospheric clouds and the chemical processes that deplete ozone with the appearance of the sun over the Arctic.

As a result of these unusual atmospheric conditions, ozone concentrations above the Arctic reached a record low for the month of March, decreasing to less than 220 Dobson Units, which is normally considered ‘ozone hole levels,’ and at the peak down to 205 Dobson units. The typical lowest ozone values observed over the Arctic in March are at least 240 Dobson Units.

The increase in stratospheric temperatures in April caused the polar vortex to shrink and break into two smaller and separate vortices and allowed mixing with ozone-rich air from the lower atmosphere. The April warm up in the stratosphere ceased the conditions that support the needed for ozone-depletion reactions, polar stratospheric clouds and terminated the depletion event.

As the meteorological conditions and temperatures are different from year to year, the severity of the ozone depletion also fluctuates.  This means that occasional large Arctic ozone depletions are still possible.

This spring’s Arctic ozone hole had a much smaller maximum extension compared to a typical Antarctic hole extent. The  2019 ozone hole over Antarctica was the smallest on record since the ozone hole was first discovered.

Scientists are monitoring the extent to which climate change is leading to stratospheric cooling, which enhances the possibilities for observing temperatures under -78°C especially in the Arctic. Those are needed for the polar stratospheric cloud formation.

WMO’s Global Atmosphere Watch Network has stations in the Arctic and these are performing high-quality measurements of both ozone and Ultraviolet (UV) radiation.

Moreover, ozone depletion in the Arctic affects the total ozone budget resulting in an increase of summertime UV levels over Canada and Europe. Each year, based on springtime ozone levels, a summer seasonal UV outlook is provided to the public in different countries.

The most recent Scientific Assessment of Ozone Depletion from WMO and the UN Environment Programme shows that the ozone layer in parts of the stratosphere has recovered at a rate of 1-3% per decade since 2000. At projected rates, the Arctic and Northern Hemisphere mid-latitude ozone are expected to heal completely before the middle of the century (~2035) followed by the Southern Hemisphere mid-latitude around mid-century, and Antarctic region by 2060.

Without the Montreal Protocol, this year’s ozone destruction would most likely have been worse. Ozone-depleting substances such as chlorofluorocarbons (CFCs) and halons, once present in refrigerators, spray cans and fire extinguishers, have been phased out under the Montreal Protocol. Nevertheless, the atmospheric measurements and analysis allowed to detect the renewed emissions of some of the controlled substances, stressing the importance of continuous observations of these constituents.

Mega projects will not create any adverse impact on the Economy: Bangladesh PM Sheikh Hasina tells the Parliament

EHLatifee.com is just not a regular news publisher, but, it is a total service provider with the ultimate in-depth analysis on any topic taken. It goes to the root before publishing any news or update on any topic.

© Copyright 2021. All Rights Reserved By EHLatifee